2015-04-15
Enthusiastic crowds, bustling machines and equipments operating day after day, are not even enough to describe how spectacular NPE 2015 was.

Since 2011, FCS Group has been in cooperation with MARUKA Machinery as the North American distributor, and immediately issued the HA series models for the US market. And with MARUKA USA’s extensive channels, FCS was able to market smoothly. FCS, together with MARUKA, they focused on plastic commodities and food packaging, exhibiting 3 systems namely Two Platen IMM, Two Component IMM and In Mould Labeling Turnkey Solution. 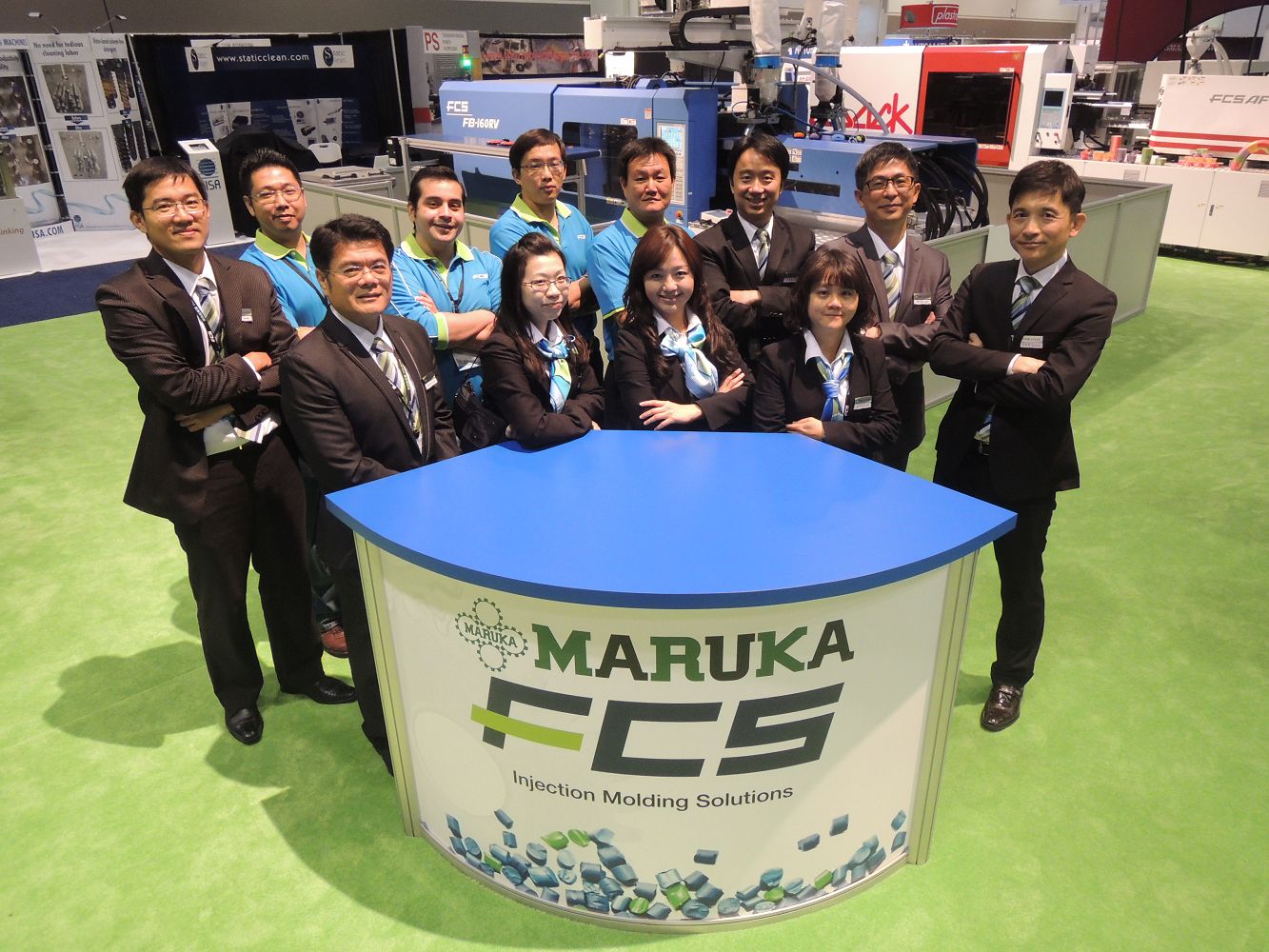 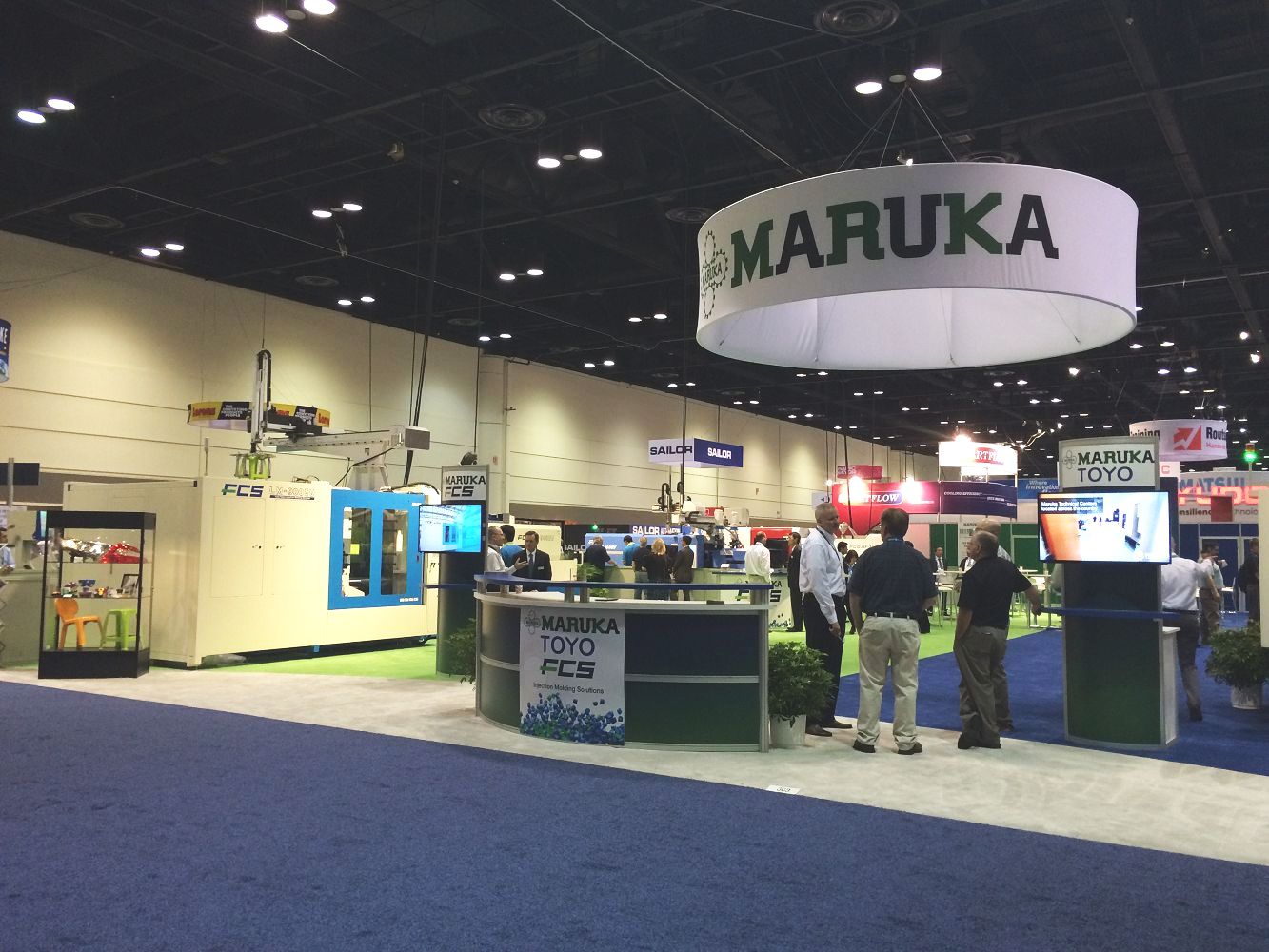 2. Servo Power-Saving Two Component IMM：FB-RV Series
A wide increase in the use of multicomponent products plus the demand for efficient and energy saving machines brought out the need for the FB-RV Servo Power Saving Two Component IMM series. FCS showcased its newly designed FB-160V by producing a 3-part two colored comb. However, do not let your eyes deceive you as the FB-RV series can reach up to 1,900 tons and produce products like car lamps and home appliances.

3. High Speed/Closed Loop Hybrid IMM：A-Pack Series
As customers search for a “one-stop-shop” solution, FCS presented its turnkey system integrating the AF high speed close-loop hybrid IMM, hot-runner mold, label, label feeding robot, and a product stocking system. The AF series is equipped with an ESD screw and adopts the bi-looped system for its design and cooperation making it cleaner, more efficient, and more precise. A thin-walled yogurt cup was produced at the event, having a attracting curious guests and visitors smooth and fast cycle time of 4.5secs. 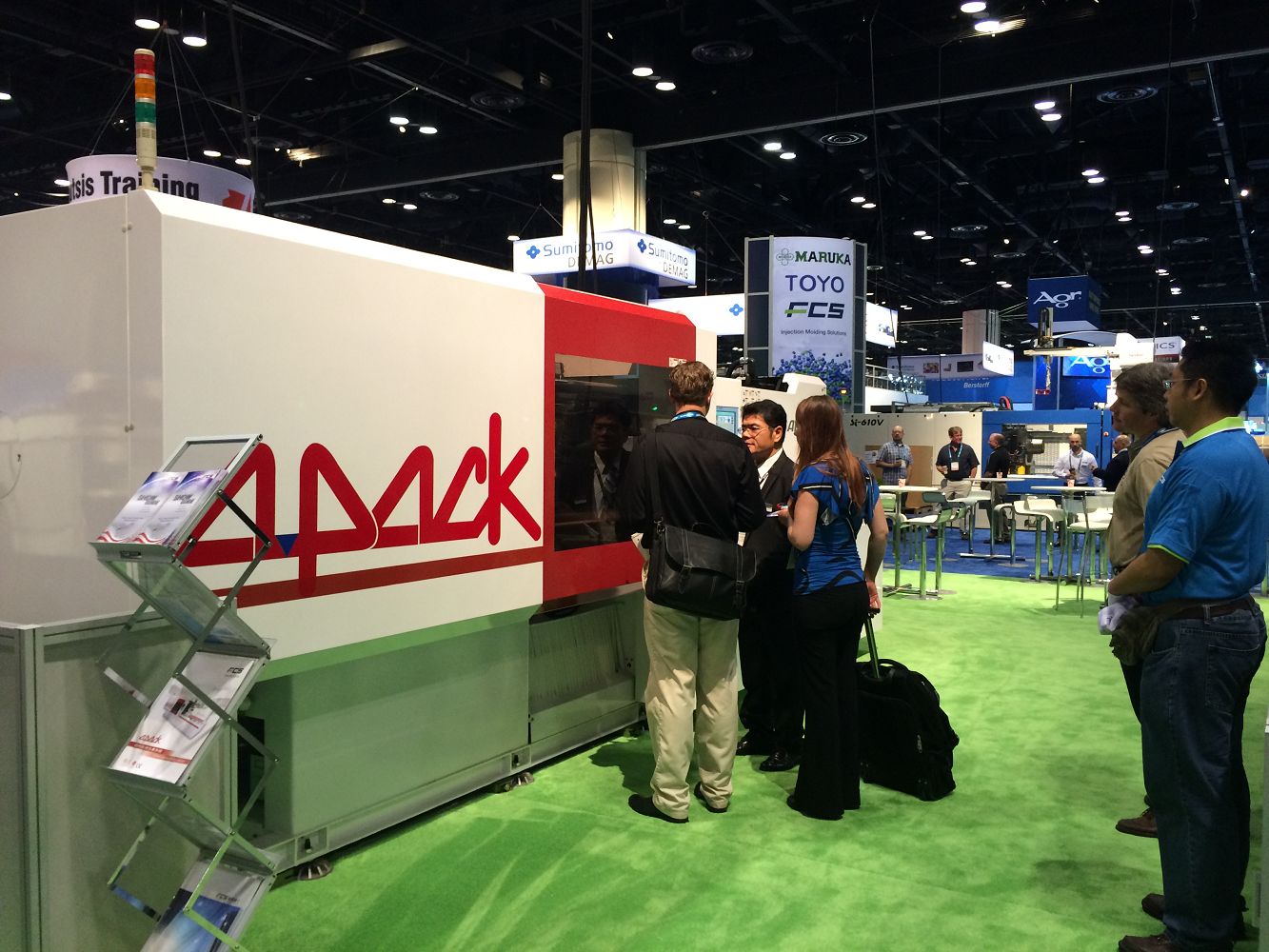 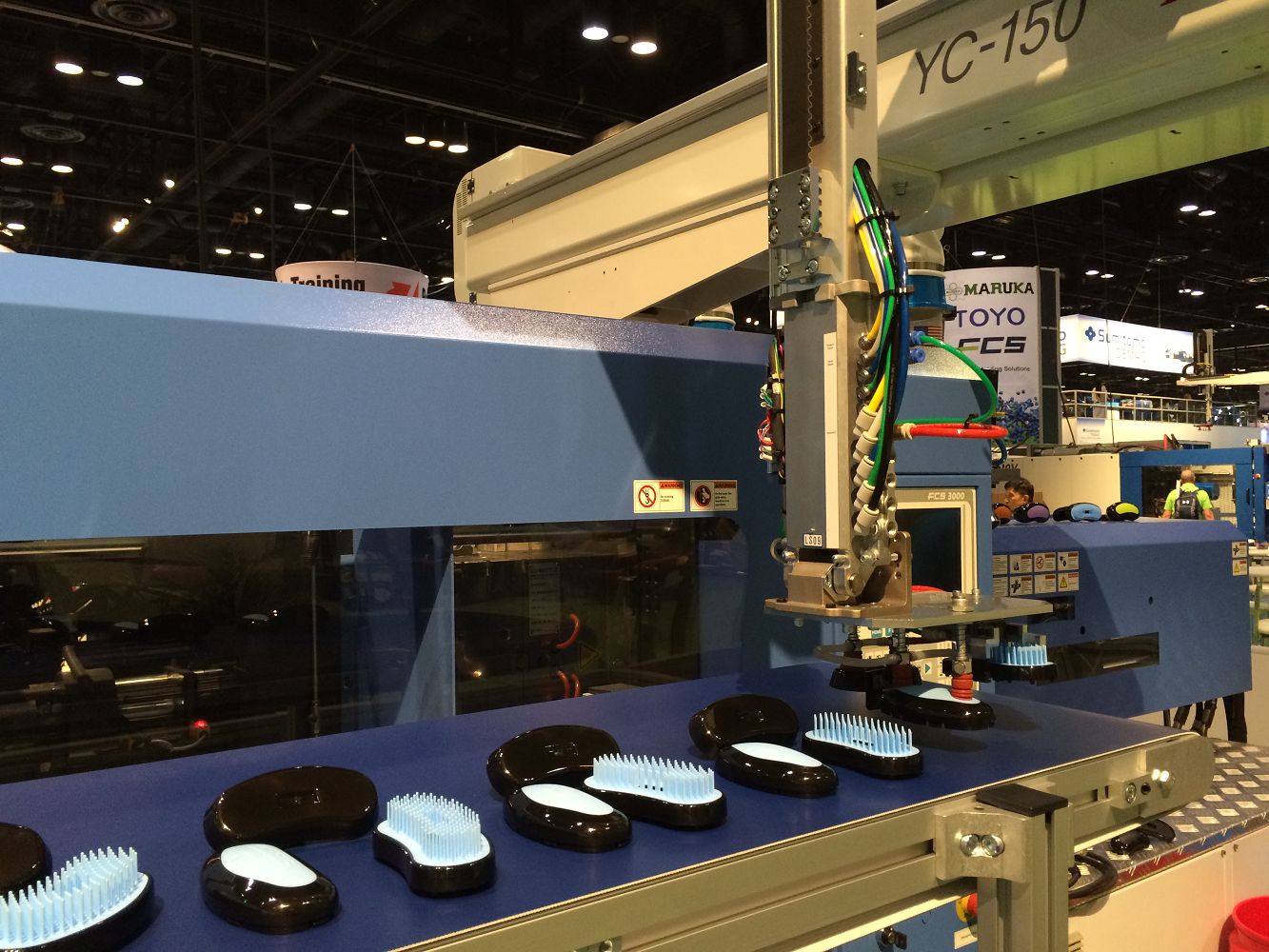 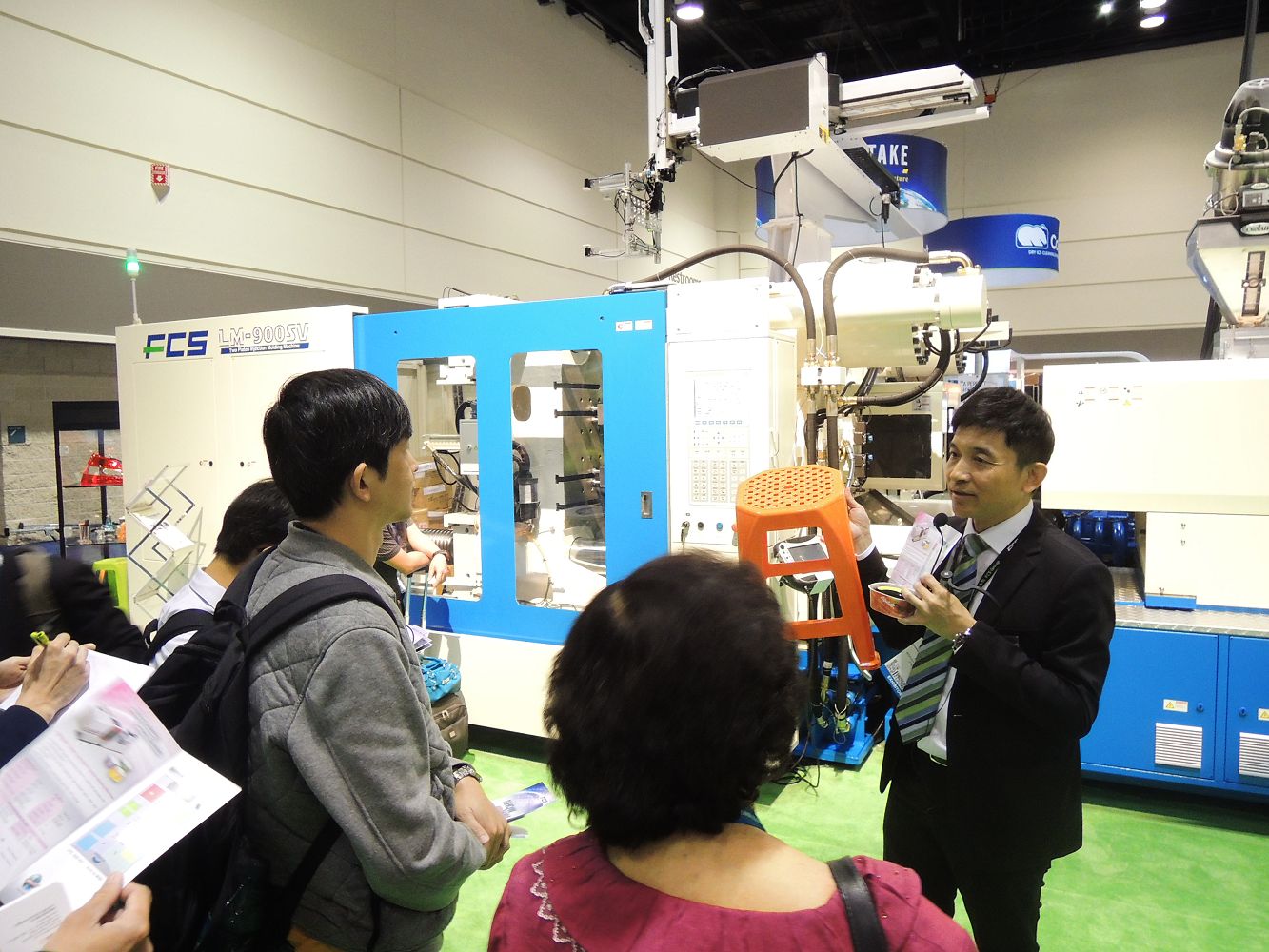 Though MARUKA exhibited TOYO’s all electric IMM, FCS was able to highlight the advantages and developments in hydraulic IMM. Not only was FCS able to garner praise from visitors but also potential orders by giving priority to the needs of the American market: A fast responding, customer oriented, and service differentiated company.